Work in progress. The name will change I expect.

I've decided to write a sequel inspired by the original Citadel created by Martin Walker. I spoke to Mr. Walker a while ago and asked him for his blessing to do a game inspired by the original and he said OK! Way back in 1992 I had attempted this kind of project (See http://www.gamesthatwerent.com/gtw64/citadel-2/ ) but this time I want to really do it properly. This time around I will be writing most of the code first and using placeholder graphics, music and SFX. This means the initial demos will be technical demos designed to show working code first. Only when I'm sure the game code is mostly complete will I start adding the graphics/sound and doing game balancing and polish.

The player moves around the map with eight-way control not aligned to the map blocks. Pickups are automatically added instead of waiting to be installed by accessing a terminal.

The player moves around the map aligned to the map blocks and with four-way movement. Pickups are stored in the inventory and can be installed when accessing a terminal. A terminal sub-game needs to be completed before an inventory item is installed or door is activated.

To use a teleporter stop the player and hold down fire.

While stationary double click and hold the fire button to activate the capture probe. Move the probe over an enemy to capture it, if you have enough energy to do so. Once captured, the enemy status will be displayed on the status panel.

The currently captured enemy can be ordered to do different actions with the function keys: 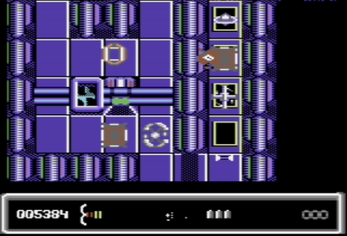